Owned by The Mountain Man by Gemma Weir

Check out Book 1: Property of The Mountain Man: 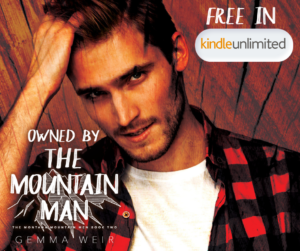 Huge, muscled and sexy in plaid, Huck Barnett is one of the most beautiful men I’ve ever seen. Every woman in Rockhead Peak wants a taste of the mountain man. Including me.

Except, after a drunken girls’ night out, instead of waking up with him in my bed, I wake up with a killer hangover and an inbox full of his texts telling me how reckless and dangerous my antics are.

Now my dad and brother want to find me a husband, and my ex-boyfriend has decided he wants the job.

But I’m not looking for marriage, I’d rather have a few incredible nights with the annoying mountain hottie. Only it turns out he’s not looking for a hook-up… he wants to own me. 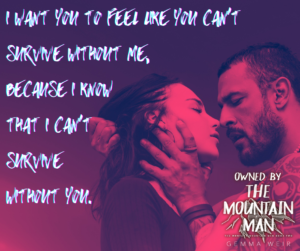 Gemma Weir is a half crazed stay at home mom to three kids, one man child and a hell hound. She has lived in the midlands, in the UK her whole life and has wanted to write a book since she was a child. Gemma has a ridiculously dirty mind and loves her book boyfriends to be big, tattooed alpha males. She’s a reader first and foremost and she loves her romance to come with a happy ending and lots of sexy sex.

Her social media links are:

“The Barnett boys don’t fall easy, but when they do, they fall hard…”
When the Barnett brothers see something they want, they take it….any way they can!
“I’ve never considered being with someone who takes control, but this feels okay, it feels strange, but not wrong.”
Cora knows how territorial the Barnett brothers can be, as her friend is in a relationship with one. But when Huck sets his sights on Cora, all bets are off. Does Cora fight Huck and his advances, or does she give in to their desires?
Huck never thought he’d fall for someone, but one look at Cora and he was done for. But trying to show her his true feelings is harder that he thought. Can the two of them come together to form a new life, or will their personalities build too many walls to break down?
“I never planned to let her go, but now it’s not even an option. She can kick and scream and fight me, she can hate me if she needs to, but she’s mine and I won’t let her leave me, not now, not ever.”
Gemma is back with steamy hot mountain man fantasy. Sex, sex and sex…so much hot steamy sex. You will be clenching your thighs the entire time you read this book! Cora is a stubborn and independent woman, and I love her. She doesn’t take crap from anyone, especially Huck Barnett. Huck is ALL man. Brute, handsome and very persuasive. Get a glass of wine, and curl with the Barnett brothers and be Owned By A Mountain Man.
“Our relationship is going too fast, it’s out of control and careening downhill, but even though I’m scared, I’m enjoying the ride and I don’t want to get off.”