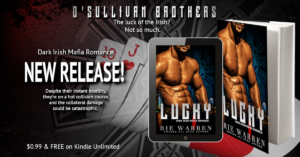 He’s concerned with one thing only: ruling his mafia empire. She’s sworn off men—especially bad ones—for life. Despite their instant hostility, these two are on a hot collision course, and the collateral damage could be catastrophic.

I know all about being down on my luck but, right now, I’m at the top of the mafia food chain, and I don’t intend to let anything, or any woman, get in my way.

Then this broad appears in my casino. Prudence Knight is a straight-up hustler, a card shark who wins hand over fist, and I refuse to be impressed.

With her smartass attitude combined with the angelic looks, she’s begging to be controlled by a mafia man like me.

I don’t plan on taking it easy on Prue. Sure, she’s been through an ordeal, but now she owes me. I’m gonna find a reason to keep her for as long as she serves my purposes. Because, after years of being under my dad’s despicable rule, the only risks I take are the ones I know will benefit me in the end.

I’ve been known to be hardheaded and I’m definitely all about my independence. I bust my butt to earn a living and I have no desire to be any man’s pawn. Not even Lucky O’Sullivan’s.

Oh yeah. I’ve heard of him. Who hasn’t? The rumors, the gossip, the mafia myths. He’s said to be an unrepentant killer, and that might be the least of my worries. I hate him at first sight, and the feeling seems to be mutual until he makes me an offer I really should refuse.

Now I owe him, which makes this arrogant mob boss think he owns me. I’m getting in too deep, but at what cost?

Lucky is book 1 in the O’Sullivan Brothers Irish mafia series. No cliffhangers. No cheating. Includes sizzling hot scenes. Can be read as a standalone.

Prue doesn’t want to want me?

Now I had her where I wanted her. Stretched out half on top of my Jeep with her face down. And she wasn’t escaping.

Something deviant compelled me to barge right against her.

Having her suddenly at my mercy again made my cock stiffen so fast blood rushed right to my groin. I jammed my pelvis against her ass so she could feel how she affected me, and she struggled.

I dragged my hands from her hips to her stomach and pulled her torso up. I held her tightly against my chest, my palms climbing over her top to hold her tits. I ran my fingers across her nipples that peaked up at my barest touch.

I let out a husky chuckle then shoved her hair aside. Leaning in, I nipped and licked her neck until she stopped resisting.

Her hot whimper was music to my ears because I knew it wasn’t fear. It was fiery desire she kept trying to contain.

And I was about to break it all free so I could wallow in her untamed need.

Tugging her around, I dug a hand into her hair and claimed her mouth. The inferno combusted. Our tongues circled and twined, my hand controlling just how hard and how long the slippery kiss lasted.

When a groan tumbled from me, I snatched her head back.

“Goddamn it, Prue.” Ragged breaths struck through my chest. “Tell me.”

“What?” She sucked her bottom lip between her teeth.

“You know what I want to hear come out of that pretty mouth of yours.” My tone was clipped and crisp.

“Fine.” With a haughty toss of her magnificent mane and pure fire lighting those crystal green eyes, she admitted, “I want you, you arrogant ass—”

I crashed my mouth over hers again. 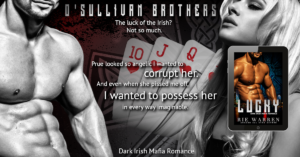 “When you were raised—or not—by a degenerate alkie crime lord who abused your ma and your sis you figured the good genes weren’t on your side.”
Growing up in the mafia life, Lucky saw some of the worst people and witnessed some of the worst situations. Taking back his family, Lucky has taken the job of protector very seriously. Prudence and her sister Derry, grew up in a rough family, which ended up in tragedy. They only have each other, and Prudence will never stop protecting Derry. When Prudence gets in trouble, her only hope is gambling, at Lucky’s casino. It’s lust at first sight for Lucky and Prudence, but neither are willing to risk their hearts. Can mafia life mix with what the sisters know? Can Lucky protect everyone and get everything he’s always wanted?
“He was bad for me, and I had a feeling he wanted to do even worse things to me.”
Lucky is HOT! Plain and simple. The chemistry between Prudence and Lucky is off the charts. Each page is like a sensory overload, filled with so much passion, suspense and action you will not be able to put it down. Prudence and Derry are a dynamite sister duo, and add in Lucky and his entourage, and you have a top notch cast. Rie has created a remarkable story with Lucky.
“I’d give anything just to have her back. Anything just to hear her bitching at me again. Anything to be able to hold her close, knowing she was safe.”